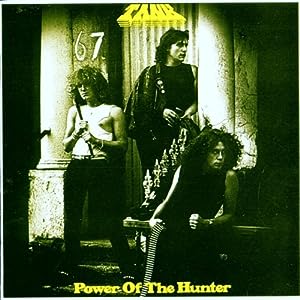 [Welcome To the Rockaliser 30, a month-long series devoted to classic albums that have been eclipsed, forgotten, misheard, or otherwise not given their propers. This is Day Twenty Seven. Archive here.]

Tank's aggressive debut, Filth Hounds of Hades, was among the fieriest British rock releases of the early 1980s, arriving on the coattails of a sound saddled retrospectively with the unwieldy handle "British New Wave of Heavy Metal" (abbreviated with the equally unwieldy acronym "NWOBHM"). Like the NWOBHM bands they most resembled (mainly Motörhead and Girlschool), Tank's sound fused the high-sludge riffery of Black Sabbath and Blue Öyster Cult, the speed and aggression of punk, and a little of the fist-pumping chants and crowd-pleasing hooks that would characterize the lucrative radio-ready sound of the latter part of the decade.

Tank's second album, Power of the Hunter, is where the group's punk chops start to yield interesting dividends. Tank's singer-bassist Algy Ward was a punk musician before falling in with the Motörhead crowd--he played bass with the Australian punk band the Saints on their second and third albums, Eternally Yours and Prehistoric Sounds, and would later replace Brian James of the Damned on that group's third album Machine Gun Etiquette. As a singer and songwriter, he clearly comes from the Lemmy school of bile-flecked vocals and outrageously un-subtle guitar licks. Power of the Hunter's opener, "Walking Barefoot Over Glass," is a five-minute anthem that feels like two minutes, a blistering no-brainer of a guitar riff and vocal line stuck in tandem, punctuated by Algy's screams of "HEY! What's going on in your mind?" The song isn't quite punk rock speed, but it reaches for a similar type of primitive expressive edge.

There are other songs on the album, such as the eponymous instrumental statement "T.A.N.K.," which rival Motörhead or the Ramones for speed. But Power of the Hunter mostly settles into a groove somewhere between mid-tempo boogie and aggressive, full-throated speed metal. Most compositions are like "Biting and Scratching," heavy, sometimes lengthy guitar riffs set over a minimal bass/drum thump. Like many NWOBHM artists, Tank's music took the aggression and ingenuity of punk and filtered it back through a slightly-refracted blues-rock take, albeit amped to the gills with amphetaminic distortion. Whether your preferred musical method of intake is bluesy, speedy, or something else, Power of the Hunter is a metal album that proudly shows resistance to the expectations of genre.