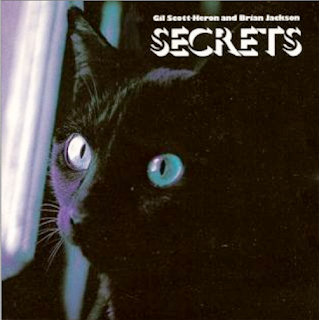 [Welcome To the Rockaliser 30, a month-long series devoted to classic albums that have been eclipsed, forgotten, misheard, or otherwise not given their propers. This is Day Fifteen. Archive here.]

Although rarely mentioned outside of his collaborations with Gil Scott-Heron, Brian Jackson’s multi-instrumental acumen and deep sense of groove were integral to the creation of nearly all the radical poet’s records between 1971 (Pieces of a Man) and 1980 (1980). During that ten-year interval, Scott-Heron witnessed the ignominious end of one presidency, suffered through two others, and warned of the impending, socially cataclysmic regime of former Hollywood actor “Re-Ron,” or alternately “Ron Raygun,” as he liked to joke. Interestingly, the first album that Scott-Heron and Jackson share proper co-credit, Winter In America, was released at the crisis point of the Watergate scandal, a few months before Nixon would resign. That album also began a gradual pivot away from the spoken-word jazz piano compositions that had been a fixture of Scott-Heron’s solo career ever since he sat down to play piano on “Who’ll Pay Reparations For My Soul?” on debut album Small Talk at 125th & Lenox. On his first few LPs, Scott-Heron’s songwriting was anchored by his serviceable-but-plain jazz figures, but on Winter In America, Jackson’s Rhodes electric piano began asserting itself as the duo’s dominant sonic indicator. Gil Scott-Heron never left his jazz training fully behind, but compare a breezy composition like “Lady Day and John Coltrane” from Pieces of a Man to a late-70s roaring funk monster like “Angel Dust,” from Secrets, and you definitely get a feeling of deepening progression. Clearly, much of this forward emphasis on groove can be attributed to what Brian Jackson brought with his Rhodes electric piano.

Released halfway through Jimmy Carter’s presidency, Secrets is Scott-Heron’s leanest collection of tunes. And yet, despite featuring one of his best-known songs “Angel Dust,” the album has been out-of-print for years. There’s never been much renewed interest in his back catalog, even after his death in 2011. One listen to “Angel Dust” should be enough to change anyone’s mind on that score. An evocative recreation of the mindset of a PCP addict, “Angel Dust” is really about Jackson’s fluid synth bass line, which wobbles its way around brief interjections of guitar and flute as Scott-Heron delivers one of his most anguished vocal performances. I cannot praise the bass work on this song enough.


The rest of the LP matches the intensity of "Angel Dust." “Madison Avenue” is an attack on Manhattan’s culture of consumption with a mighty breakdown and an appealingly agile jazz guitar solo at the end. “Cane” is a tragic ballad inspired by the Harlem Renaissance poet Jean Toomer and his novel of the same name, which focuses on two female characters from the book, Karintha and Amy. This song is one of Gil's earliest pro-feminist anthems (”For often as our flowers grow/men will try to cut them down”), a subject that would ultimately become the central focus of his swan song, 2010's I’m New Here. Picking up the pace dramatically, “Third World Revolution” is Gil’s call to revolutionary action, aided by a tight piano groove and some judicious cowbell. “Better Days Ahead” is the record’s slowest ballad, resting on the strength of Scott-Heron’s gentle, optimistic croons. “Three Miles Down” contains one of Jackson’s synthiest bass productions and an oppressive metaphor for impotent rage against white society: “Feels like I’m working in a graveyard three miles down.” And that’s just 2/3 of the record. Every song on this album is a killer; even the album cover ranks among the poet's best.
Posted by Nathan at 3:30 PM