The Rockaliser 30: Del Tha Funkee Homosapien, I Wish My Brother George Was Here (1991) 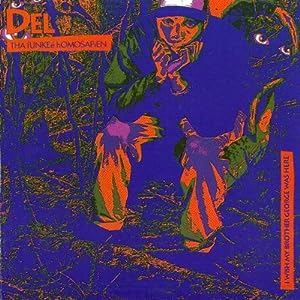 [Welcome To the Rockaliser 30, a month-long series devoted to classic albums that have been eclipsed, forgotten, misheard, or otherwise not given their propers. This is Day Six. Archive here.]

In the early 90’s, West Coast ghettos were full of furious rappers who sold drugs, drove drop-tops, and got all the girls. Step to these guys, and you were in trouble--there wasn’t room in their hood for your bullshit.

Or so hip-hop fans could be forgiven for thinking. Del Tha Funkee Homosapien had no such pretensions. The East Oakland rapper represented the other side of the ghetto coin--a fanciful, wickedly intelligent “funky human being.” Oftentimes, the subjects of Del’s songs are the inverse of what his West Coast peers were spitting. Instead of hosting all night parties, Del complains about the freeloading pals staying with him and his Mom. Instead of flossin on Slauson, or rolling round on Endo, Del is moderately high while he waits at the bus stop (“The Wacky World Of Rapid Transit”). Most tellingly, instead of fronting about terrorizing his own neighborhood, Del complains about how often he gets stuck up (“Hoods Come In Dozens”).

The kicker is that Del’s album is funkier than anything else was in ‘91. He’s not only smarter than his West Coast peers, but funkier than them too. There’s a generous dollop of George Clinton in the album’s bright funk--and Clinton is the George of the album’s title. More than half the tracks sample P-Funk. Del rides this sound, sounding laid-back even as he gets worked up about Vanilla Ice, bus service, and prostitution . Production was mostly supplied by Del himself and the team that would build Death Certificate (including Ice Cube, Del’s cousin). It’s great, but Del’s the star of every track. Del’s best known work explores futuristic alienation, but it’s great to hear him on his debut, a funky human being at home in his sunny meadowz.