There are a great many brilliant things about the Rolling Stones--and surely just as many awful ones--but among the unequivocally good stuff nothing tops their catalog of country originals. "Sweet Virginia," "Dead Flowers," and "Memory Motel" attack country from different angles but rate among Jagger and Richard's best. The material consistently brings out Jagger's most arch, condescending poses, or else provides for unusually direct, irony-free moments.

Let's envision an alternate universe in which, during the Stones' classic period (1967-1978, in my book, but feel free to extend or shorten it a couple years in either direction) they only released genre albums.* You'd have a double LP of electric rockers, a blues disc, an EP of reggae tunes, and Satanic Majesties as is. I took the liberty of doing this for their country songs.

Before we get to the album, however, a couple notes. First, the definition of country is broad and not technical. Second, the imaginary album must follow the constraints of Rolling Stones albums from this period, so between 8 and 10 tracks around 45 minutes. Third, we'll leave out earlier songs--I'm thinking of "Some Things Just Stick In Your Mind" and "High And Dry"--because they don't have the right attitude, or else sound too English.

The tracklist, followed by a run through: 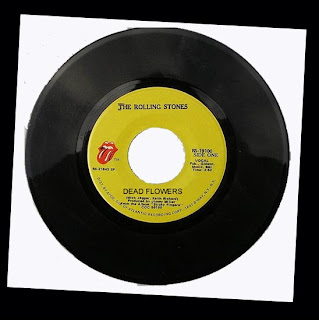 The fade-in of "Country Honk" gives us a sense of place, a dusty stoop on a minor road, with no sense of urgency. The song itself, a superior, countrified take on "Hoky Tonk Blues," with a wily fiddle and guitar work that sounds disinterested, or drunk. In this setting, Jagger's lyrics lose the sense of misanthropy, and sound more like bar room reminiscences, of dubious veracity, and more than a tinge of regret. The second song, and undoubtedly the lead single, is "Dead Flowers." An eminently bitter song, it's quintessential Stones. I've already examined the lyrics, but I will add that it's perfect, lyrically a summation of the vices that made the Stones tick, and musically a complete jewel. Charlie, Bill, and Keith, on rhythm, give the song an understated kick, and Mick Taylor's lead sounds as twangily insolent as the narrator. The piano and acoustic guitar never sound that present, but form a crucial part of the whole. "Dead Flowers" makes the case that invective sounds better drawled.

From there, a transition to straight-faced country and back. The spare "No Expectations" follows "Dead Flowers." Jagger doesn't deploy his country snarl here [it wasn't worked out yet], but an evocative, dejected slide carries the song, with an assist from Wyman. This narrator will grow up to sing "Dead Flowers," discovering that he had many more expectations than he realized. "Dear Doctor" injects some humor into Rose Pink, and keeps intact a transition that worked on Beggars Banquet. The guitars and harmonica chime, egging on the narrator to share his tale of ice cold feet on a young man's wedding day. Jagger's faux-female singing voice is as bad an impression as I've ever heard, and there's an egregious one to come. But, before that, wrapping up Side One, is "Sweet Virginia." A slow number that hits upon many of Jagger's pet themes, but with a rare generosity of spirit; the backup singers play an important part in this. The songwriting coalesces like little has before or since, Charlie Watts' lazy stomp laying down the groundwork for a wearily optimistic Stones orchestra of acoustic guitars, harmonica, ivories, and Bobby Keys on saxophone, who practically duets with Mick. It ends Side One because "Sweet Virginia" gives the listener as much incentive to go face the world again as she's likely to ever get. A pause seems appropriate.

Side Two of Rose Pink Cadillac begins with "Love In Vain" and the mood is as downbeat as the title suggests. Barnstormers weren't something the Stones did, and if you thought Side One was slow, or a bummer, best get off now. Not that you would: "Love In Vain" is the Stones' best Robert Johnson cover, a song with the unhurried gait of a man with nothing left to lose but plenty to wallow around in. The tune sounds more terse than it actually is--there are at least four musicians playing, including Ry Cooder on mandolin--but there's nothing wrong with being direct. Johnson's lyrics marshal a handful of simple phrases into three powerful verses, and Jagger's straight reading of the material complements the somber tone. The side's second track, "Memory Motel," features an electric piano that's not particularly country, but it's a beautiful ballad, country in spirit. Certainly paid-by-the-tear Nashville types would recognize their craft in "Memory Motel." It's the only time on Rose Pink that we heard the Richards' hoarse, soulful voice. It's also the fourth song sung from the perspective of a man who can't get over an old flame who did him wrong, though "Memory Motel" is the most adult take on this theme, downright sentimental. Easily the longest song here, its forlorn swirl makes 7:09 sound brisk.

"Far Away Eyes," practically dripping with scorn for its nearly retarded narrator, takes a different approach. Utilizing nearly every convention of country and western music--from a cozy shuffle to Ron Wood's pedal steel to the rural, God-loving narrator--nothing about the instrumentation necessarily suggests irony, though Jagger's insistent performance inclines me to read everything in that way. Probably a parody of the Bakersfield sound, but done with respect for the music, if not its listeners. As "Far Away Eyes" draws to its close, the ballrooms and smelly bordellos of "Torn & Frayed" take over, as does another beleaguered narrator. Uniquely, this one finds redemption in music, his shoddy coat be damned. And, though rendered with a light touch, the sweet chords of "Torn & Frayed" prod us in the same direction. The beat here is somewhat harder, the emotion genuine again; it sounds like something Dylan, Kooper, and the Hawks could have banged out in 1966.

As moments of desperation go--always a fine way to end an album, incidentally--"Angie" doesn't quite match "I'm So Lonesome I Could Cry," but it doesn't aspire to plumb the same depths. For one, the narrator holds out hope--he's only desperate because he knows he and Angie could still have it so good. Whether or not he's right--and if he's anything like Jagger I hope Angie heads for the hills--his conviction defines "Angie." It's downright mawkish--check the piano and those syrupy strings--but the melody redeems the tune. Rose Pink Cadillac ends on this more delicate emotional note.


*Today this exercise would be called making a playlist or, more generously, a fan-curated mixtape, but how much fun is that?
Posted by Aaron at 1:55 PM