With the Democratic presidential race getting heated, it is surprising to note another, entirely separate Bernie/Clinton feud. The Bernie in question here is Bernie Worrell, keyboardist and songwriter in Parliament and Funkadelic. The Clinton in question is George Clinton, lead singer of same.

Together with bassist Bootsy Collins, these men made up the songwriting core of the two groups for most of the 1970s and early 1980s. Their accomplishments are of course legion and not worth discussing here at length. Suffice to say that while Parliament and Funkadelic had dozens of members, those three men (plus Eddie Hazel) were the most restless sonic innovators.

Today, Clinton still tours and performs often with a Bootsy and Bernie-free version of Parliament/Funkadelic (now just a single band). He still records music fairly often (most recently this collaborationwith Kendrick Lamar and Ice Cube) and enjoys his status in many documentaries and awards shows as an elder funk statesman. Even more recently, he has become a crusader for musicians’ rights and digital rights protection.

Worrell, by contrast, has lived the last decade in relative obscurity and bankruptcy. In January of this year, his wife Judie wrote on Facebook that Worrell was suffering from fourth-stage lung cancer. The note mentioned that he was rejecting chemotherapy and going on an expensive treatment plan, but seemed hopeful that Worrell was in good spirits and still able to play occasional gigs.

As usually happens with the deteriorating health of older legends, the music press ignored the news until celebrities rallied to the cause. So it was that on April 4, Pitchfork and Stereogum reported on the news of a benefit at Manhattan’s Webster Hall. Bernie attended, and in addition to the Black Rock Coalition house band, guests included Rick Springfield, Paul Shaffer, Meters guitarist Leo Nocentelli, Talking Heads’ Jerry Harrison and David Byrne, and P-Funk head Meryl Streep.

Also attending and playing were George Clinton and Bootsy Collins. Clinton and Collins came on stage together, Collins presenting Worrell with a psychedelic melodica present while Clinton hugged the keyboardist. They played through a weird jam version of “I’d Rather Be With You” with Bootsy on drums, then continued with “Flashlight” (always one of the best showcases for Worrell’s playing). A general spirit of conviviality and joy, in spite of Worrell’s illness, seemed to be the main feeling in the crowd.

So it was odd for me to see that night, posted just hours before the concert began, this Facebook note:

The note (not written by Worrell, but by his wife) makes a number of claims that go against Clinton’s persona as a crusader for musicians’ rights. The first claim is that Clinton called Worrell’s bankruptcy claims “fictitious.” This seems odd for someone who fought so valiantly for musicians instead of labels to own the rights to their music. I searched Google for “Bernie worrell bankruptcy” and found nothing (it is here that I might humbly defer to my esteemed colleague, who is an actual journalist and might know how to look up these things). I see no evidence of Clinton denying or dismissing Worrell's legacy or contributions in any interview.

The other main claim is Clinton’s “outright theft of everyone’s royalties.” If true, this outright theft isn’t mentioned by other surviving members of the P-Funk clan, including Bootsy, Michael Hampton, and others. We know a large portion of their catalog is credited to “Clinton/Collins/Worrell,” and we also know that Clinton has had a long legal battle with the firm Hendricks & Lewis, maintaining that his signature was forged on various agreements that gave up copyrights to his songs. Has Clinton since negotiated a new deal with the owners of his catalog that gives him more money and rights than his former partners?

There doesn’t seem to be clear information on the Internet about this either. It is downright mysterious. Judie then responded to a fan accusing him of “appearing on stage with him and ripping [Clinton] apart in a fbook post.” She responded: 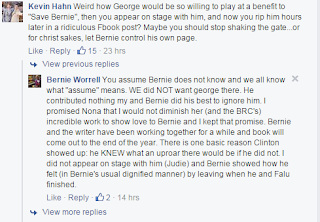 Judie Worrell’s description of the moment (where Worrell did his best to ignore Clinton) does seem contradict actual footage that shows the men, well, hugging each other. Maybe Worrell was hugging back out of politeness, but the genuine camaraderie between Collins, Clinton, and Worrell at that moment seemed real (at least, according to eyewitness accounts). There is nothing more sad than the spectacle of musicians who clearly hate each other doing the reunion racket (Hey, Slash and Axl Coachella 2016). Think about any time David Gilmour and Roger Waters step on a stage together. This…didn’t look like that.

So what is going on? Judie promises that Bernie’s upcoming autobiography will tell all. Does it have something to do with the fact that George Clinton goes on the road as “George Clinton & Parliament/Funkadelic”? Is it because George Clinton is a more well-known and beloved musician today? What caused the rift between the two men, and why? Neither seems willing to acknowledge a problem exists.

If we had an actual music press, they might want to consider asking: is George Clinton really shortchanging his bandmates? If so, how? And why is no one reporting on it? Professing on one hand to battle for the rights of musicians, while at the same time diminishing the accomplishments of one’s band members, is the kind of two-faced move one might expect of a very different Clinton. Let us hope it is not true.
Posted by Nathan at 11:52 AM