Two posts ago, I noted that Alan Sparhawk likes to talk about how he likes dub. To back it up, I googled it. I found what I wanted, but also discovered what googlers are looking for when they search for Alan Sparhawk: 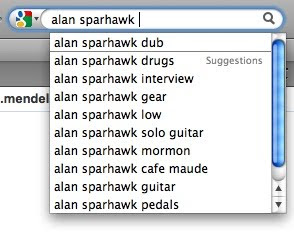 Unless there's an Alan Sparhawk who works as a drug dealer, I think that it's sad that the number one search result for his name is "alan sparhawk drugs." The guy's had problems, sure, but even higher than "alan sparhawk low"? Disappointed in internet users, but intrigued by the opportunity to glimpse at what people associate with some of my favorite musicians, I did a few more.

I suspected Courtney Love's would be sordid, but take a look at number three: 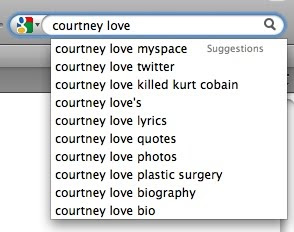 I don't think I've ever seen it put that bluntly.

This one was pretty interesting. It turns out that people aren't interested in Craig Finn's favorite beers, but rather his favorite Drive By Truckers songs. But wait, what are numbers two and three?: Turns out Craig worked as a divorce lawyer between Lifter Puller and THS. Or something. I clicked on both and found out nothing about his personal life, so instead of searching for "craig finnberg" I assumed he changed his name to Finnberg upon moving to Brooklyn. 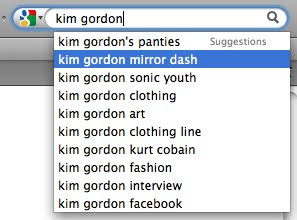 Woah! Or at least that's what I'd say if "Kim Gordon's Panties" weren't a song by Rapeman, Steve Albini's late Eighties group. But that a song from a 1989 noise-rock album, especially one with that title, is the number one suggestion for Kim Gordon searches...you have to wonder about that. 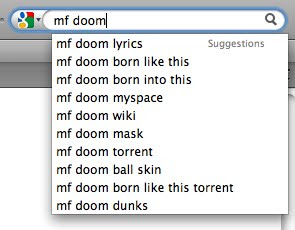 The last one particularly captivates me. Could there be a video of the erstwhile Daniel Dumille slam dunking? Alas, the dunk is a sneaker. I was glad to know in advance that the second half of "mf doom ball skin" referred to a song title.

Finally, sometimes you can prod the search toolbar to produce fun (or disturbing) results: 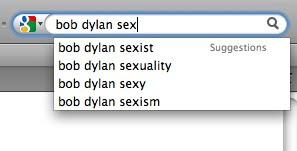